July 2014
Congratulations to Rachel Ellman for successfully defending her PhD thesis in the Harvard-MIT Health Sciences and Technology Program! Rachel is setting off to LA to start her new career at SpaceX!

March 2014
Check out the Genes and Galaxies Symposium hosted by Harvard Medical School Department of Genetics.

December 2013
Congrats to Dennis Anderson for recieving an outstanding research award from the National Center for Simulation in Rehabilitation Research (NCSRR)!

November 2013
Congrats to Rachel Ellman for the best student poster at the annual meeting of the American Society for Gravitational and Space Research!

November 2013
Congrats to Alex Bruno for successfully defending his proposal for PhD research in the Harvard-MIT Health Sciences and Technology Program!

October 2013
New paper by Rachel Ellman and team on the “Combined effects of botulinum toxin injection and hindlimb unloading on bone and muscle,” appearing in Calcified Tissue International. Congrats Rachel!

August 2013
New paper in the JBMR by Alex Bruno and the Framingham team comparing vertebral size, bone density, and strength in 981 pairs of men and women from the Framingham Heart Study that were matched for age and areal spine BMD. Link to Paper

August 2013
Congratulations to Clara De Paolis who will be starting a graduate program in electrical engineering this fall at Tufts University!

August 2013
Congratulations to Dennis Anderson who was awarded a K99/R00 Pathway to Independence Grant from the National Institute of Aging!

August 2013
Congratulations to Dennis Anderson and the Framingham Team for a new manuscript assessing the assoication between QCT-based vertebral bone measurements and vertebral fracture. Link to Paper

May 2013
Congratulations to Jordan Spatz for being awarded the Hugh Hampton Young Fellowship in support of his graduate studies at the Harvard-MIT Division of Health Sciences and Technology.

May 2013
Congratulations to Mary Bouxsein for being awarded the ESCEO-IOF Herbert Fleisch Medal in honor of her work in the field of skeletal fragility.

April 2013
Congratulations to Rachell Ellman and Jordan Spatz for their papers on the mechanical regulation of bone in the April issue of JBMR. Link to Rachel’s Paper and Jordan’s Paper.

February 2013
Congratulations to Alex Bruno for being runner up in the NSBRI Graduate Student Poster Competition at the NASA Human Research Program Investigators’ Workshop. His poster explores how individual variation in spinal curvature and muscle morphology influence in vivo estimates of spinal loading: [Alex’s Poster]

December 2012
The Bouxsein Lab wishes everyone the Merriest of Holidays and Joy in the New Year!

November 2012
Congratulations to Rachel Ellman for her publication investigating the relationship between skeletal loading and bone mass and architecture: Link to Paper 1

October 2012
Congratulations to Jordan Spatz for his recent publications investigating the link between sclerostin and skeletal loading: Link to Paper 1, Link to Paper 2

September 2012
Lab member Clara De Paolis has been selected as one of the 2012 BIDMC Latino Achievement Award Honorees for her work to promote math and science education among underserved minority communities in the Boston area and nationally. The Latino Achievement Award Ceremony will take place on October 3rd, 2012, from 12:00 to 1:00 p.m., in the Rabkin Boardroom on Shapiro 10. Congratulations Clara!

Rachel Ellman et al, “Site- and compartment-specific effects of microgravity on the skeleton in mice flown on the STS-135 shuttle mission” (oral presentation)

Mary Bouxsein et al, “Association of prevalent vertebral fractures with bone density and strength at the thoracic and lumbar spine in men and women” (poster)

August 2012
Congrats to Lamya Karim on being awarded a T32 Training Grant for Translational Research in Aging from BIDMC/Harvard!

August 2012
A warm welcome to Dan Brooks and Clara De Paolis, the most recent members of the Bouxsein Lab!

August 2012
Congratulations to Dennis Anderson and Alex Bruno for presentatons at the American Society of Biomechanics annual meeting.

July 2012
Congratulations to Microindentation team for receiving a 1 year grant from Merck to investigate the etiology of atypical femoral fractures.

July 2012
Congrats to Maureen Devlin for accepting her new position as assistant professor of anthropology at the University of Michigan! You will be missed!

June 2012
Congrats to Rachel Ellman for receiving the American Institute of Aeronautics and Astronautics Orville and Wilbur Wright Graduate Award!

May 2012
Harvard Medicine Magazine article on space-related research being conducted by Harvard faculty members, including our STS-135 experiment looking at bone loss in mice: Space Savers

May 2012
Congratulations to Framingham team for manuscript in JBMR reporting the link between thoracic kyphosis, whole-body posture, and vertebral loading: Link to Paper

May 2012
Harvard Magazine trailer for an upcoming article on space-related research being conducted by Harvard faculty members, including our STS-135 experiment looking at bone loss in mice: Space Savers

March 2012
Congratulations to Rachel Ellman and Jordan Spatz for representing the Harvard-MIT Bioastronautics Program at the official opening of the National Space Biomedical Research Institute and Baylor College of Medicine’s Center for Space Medicine. The new facility will be used by biomedical researchers to better understand the human health risks associated with long duration space flight, and to develop countermeasures and technologies to mitigate those risks. Also in attendance were Senator Hutchison of Texas, the director of NASA Johnson Space Center Mike Coats, and the director of the NSBRI Jeffrey Sutton. More information on the center can be found here: Area researchers work to keep astronauts healthy in space

February 2012
Congratulations to Alex Bruno and Jordan Spatz for winning 3rd and 5th place in the poster competition at the NASA Human Research Program Investigators’ Workshop! 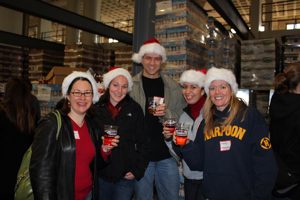 Volunteer Decorating at Christmas time through the Harpoon Brewery

August, 2011
Congratulations to Sean Serell for new job at Conformist!

August, 2011
Congratulations to Sneh Shah for his new job at Terumo!

June 29, 2011
Going away / good luck party for Alison, who is leaving the lab to begin a PhD program in Mechanical Engineering at MIT. A fun evening at La Verdad. Good luck Alison!

Great lecture at Orthopedic Grand Rounds this morning by astronaut and orthopedic surgeon, Robert Satcher, MD. See all his groupies…

May 23, 2011
Congratulations to Alex Bruno on passing his PhD qualifying exam in the MIT-Health Sciences and Technology Bioastronautics Program!

Lab trip to weekday afternoon game at the RedSox! (too bad the Sox lost…)

April 2011
Congratulations to Maureen Devlin, PhD, who was promoted to Instructor of Orthopedic Surgery at Harvard Medical School!

April 2011
Congratulations to Alex Bruno for his first conference oral presentation at the GRIBOI annual meeting in Boston.

March 2011
Congratulations to John D’Agostino for being accepted into graduate programs at Northeastern and Tufts!

March 2011
Congratulations to Alison Cloutier on the news that she was awarded an NSF Graduate Fellowship!

February 2011
Congratulations to Rachel Ellman for her award for outstanding student poster at the 18th Annual IAA Humans in Space Conference! [link]